How Arik Staff were caught stealing at Lagos Airport

The Aviation Minister, Osita Chidoka, on Monday said the ministry has arrested three Arik Air staff for stealing fuel from an aircraft.

Making the announcement on his official Facebook page, Chidoka said the trio of Blessing Dugbe, Samuel Asuquo and Isaac Ajakaiye were arrested at the Murtala Mohammed International Airport, Lagos, during a security patrol operation on Sunday at about around 3 a.m. The trio were stealing Jet
A1 fuel from Arik Air plane, with registration number: 5N-MID into six jerry cans for sale at a cheaper price to other unsuspecting airline operators.

“A development that has capacity, to threaten safety and security of airplanes. Meanwhile, the three (3) suspects were handed over to the Crime Investigation Bureau (CIB), AVSEC MMIA for further action,” Mr. Chidoka said.

He said considering the magnitude of the crime to the security and safety of airplanes, the chief security officer of the Lagos airport has been asked to ensure that the suspects are handed over to the airport police for adequate prosecution.

This is not the first time that Arik staff are accused of theft. Passengers have often lamented the loss of one item or the other, ranging from iPad, jewelleries, clothes to perfumes, aboard the airline’s flights.

Arik is yet to officially comment on the latest incident. 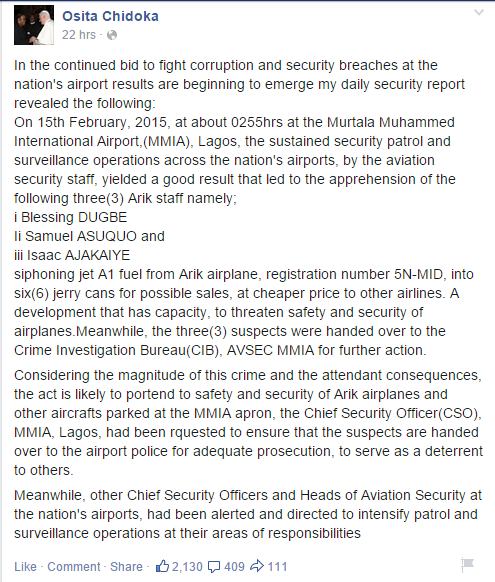