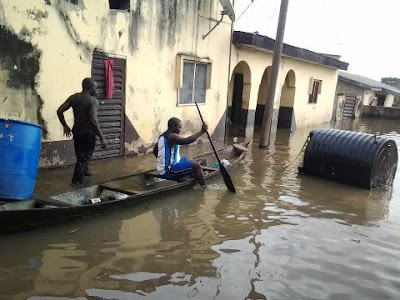 The Attah Igala, HRM, Micheal Ameh Oboni, has joined in the call for wealthy individuals to join hands with government in bringing succour to those who have been affected by this year’s flood.

The Royal Father stated this when he received in audience, Kogi State Deputy Governor, Yomi Awoniyi, while on a visit to Idah and Ibaji Local Government Areas of Kogi State to carry out an on the spot assessment of the impact of this year’s flood on the two areas.

The Royal Father described the flood as a natural occurrence, not caused by any individual or government, but commended the swift response of the State Government to see the impact of the flood on the people and to also provide shelter and relief materials for those affected.

The Attah Igala, called on individuals and organizations from the various areas were people were affected by the flood to come to the aid of those affected, disclosing that with government’s huge responsibilities, amidst the drastic drop in resources to State and Local Government, people should partner with government to provide succour.

While he commended the resilience of the people of Idah and Ibaji who have lost properties, farmlands and other valuables, the Royal Father prayed God to grant those affected the strength to overcome the challenge.

Earlier in his remarks, Kogi State Deputy Governor, Yomi Awoniyi, and Chairman Flood Management Committee, said following the directives of the State Governor, he had to carry out an on the spot assessment of the extent of damage the flood may have caused the people of Idah and Ibaji Local Government Areas.

While noting that houses, farmlands, and other valuables have been washed away by the flood, Awoniyi, commended the initiative of the Senior Special Assistant’s of the two Local Government Areas, to ensure that the impact is reduced in the immediate.

Awoniyi disclosed that two camps have been identified for Idah and Ibaji Local Government Areas, said government is in the process of making the camps habitable for IDP’s.

Supply of relief materials, adequate security, electricity to the camps and the provision of seedlings to make up for the washed farmlands are top on the priority of government.

Awoniyi, advised those living and building on flood plains to have a rethink, move to upland as it is becoming obvious that the flooding is now a regular occurrence.

Hon. Edimeh Arome of Idah and Amaje Felix SSA 2 and SS3 of Ibaji respectively, commended the prompt response to visit the area and the promise by government to provide them with relief materials as well as making their camps habitable.