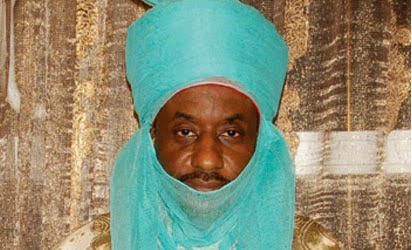 Boko Haram leader, Abubakar Shekau, has threatened to attack the Emir of Kano, Muhummadu Sanusi II, in retaliation for the Emir’s call on Kano residents and other Nigerians to arm and defend themselves against the terror organization.

In a new video released weekend, Mr. Shekau said his group does not consider Mr. Sanusi a true Muslim, and will attack him whenever an opportunity presents itself.

The Emir had earlier issued a call to arms after a series of deadly attacks by suspected Boko Haram militants in Kano.

Speaking at Kano’s central Mosque in October, the Emir charged the people of Kano to arm and defend themselves against the sect, which is responsible for more than 13,000 deaths.

Militants later launched a deadly assault on the Mosque on Friday, November 28, detonating multiple bombs and shooting worshippers to death.

Over 100 people died in the attack which was believed targeted at Mr. Sanusi.

The Emir, who had travelled out of Nigeria at the time, visited the Mosque on his return, and re-affirmed his vow that the Kano people will not cower in the face of Boko Haram’s threats.

In a 19-minute new video first released Saturday, Mr. Shekau did not claim responsibility for the Mosque attack. But he said his group remains prepared to fight and kill anyone who challenges its ideology, and all non-Muslims and “fake” Muslims like the emir.

Mr. Shekau said his group will fight local vigilantes and hunters, who have successfully crushed the advances of its fighters in some parts of Nigeria’s northeast.

“Emir of Kano Sanusi you are late, that our triumph is just for a period of time so you said. Even your predecessors who are renowned idol worshipers in Islamic history like ‘Abujahal’ could not succeed fighting Islam.

Yes you can say that our success is for a period of time, because you are a king of Bank and a loyal citizen of his country,” Mr. Shekau said.

The terrorist leader said his members are ready to be slaughtered and killed so they can rest in heaven.

“Because you are made the Emir of Kano that is why you got angry and was calling on the Vigilante groups and hunters to attack us. Let me tell you that the hunters and the vigilante groups will fail and you will also fail,” he said.

He condemned all other Islamic sects in the country calling them pagans.

He said the Izala, Tijjaniyya, Qadiriyya and Shiite Islamic groups are pagans and his group will continue to kill their followers.

He also condemned the government Saudi Arabia saying they will all perish in hell. “We will kill you people, we will capture hostages and keep selling some.’

We All Have Sinned