Stand therefore…having shod your feet in preparation [to face the enemy with the firm-footed stability, the promptness, and the readiness produced by the good news] of the Gospel of peace. – Ephesians 6:14-15, The Amplified Bible

Preparation. When it comes to fighting spiritual battles, that’s a word you’d do well to remember. Most believers don’t pay much attention to it. They don’t prepare themselves in advance. They fiddle around until the devil makes his move, then they jump up and try to fight him with the Word… and they usually lose.

I used to do the same thing until the Lord taught me differently. I used to wait until my meetings began to pray for their success. As Satan would come against them from one direction, I’d fight him there. Then he’d move around and attack them in another area, and I’d fight him there.

One day the Lord showed me that by waiting until the last minute to take my stand, I was giving Satan time to build up his forces against me. And consequently, I was losing many of my battles. Then the Lord said something to me I’ll never forget. He said, If they had kicked Al Capone out of Chicago when he was just a small-time operator, he wouldn’t have been so hard to handle; but they waited until he became a first-class criminal with his forces built up around him. Then it took an army to bring him down.

When I heard that, I made up my mind never to be caught unprepared again. I started praying about those meetings weeks in advance, getting the stage set spiritually before they ever began. Instead of letting Satan get his forces entrenched, I started throwing him out before he got a single foothold. When I did, I saw more victories than I ever had before.

Don’t let the devil catch you off guard. Be prepared! Start praying and speaking the Word of faith now over your family, your business, your church. Get your feet shod with the preparation of the gospel of peace. Then if Satan causes trouble, you’ll be well-equipped to run him out of town.

This message was written by Kenneth and Gloria Copeland, the leader of the Kenneth Copeland Ministries (www.KCM.org) that specializes in teaching principles of bible faith – prayer, healing, salvation and other biblical topics. 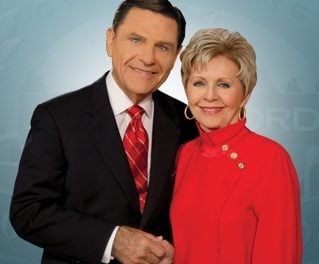 Kenneth Copeland devotional 28 May 2020 – Receive the Man of God

RCCG House Fellowship Leader Manual 24 October 2021 – I Am Jesus, Whom You Are Persecuting

DCLM Search The Scripture 24 October 2021: The New Heaven And The New Earth