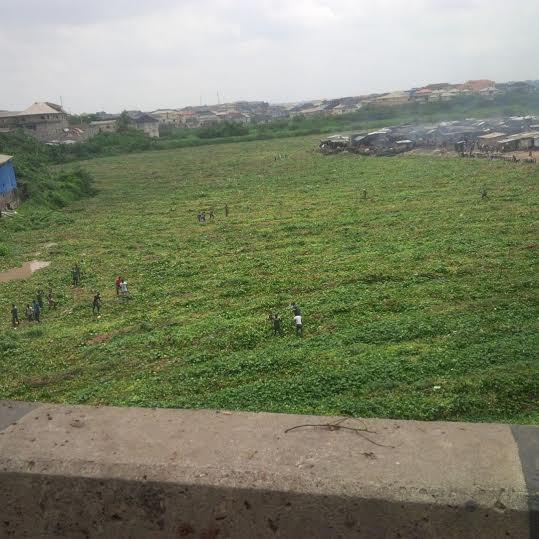 A part of the popular Ogun River which flows under the Kara Bridge around Ojodu Berger area of Lagos State has suddenly gone dry.

Unidentified green plants are seen on the river while the water body has given way.

The Kara cattle market community under the bridge along the Lagos-Ibadan expressway has become a Mecca of some sort with residents of the community and passers-by trooping to see the dried section of the river which once provided water for the Kara cattle and ram market. 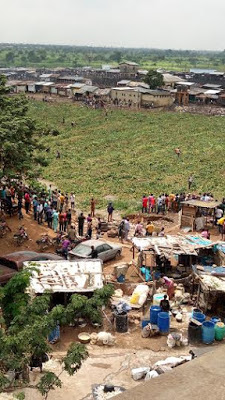 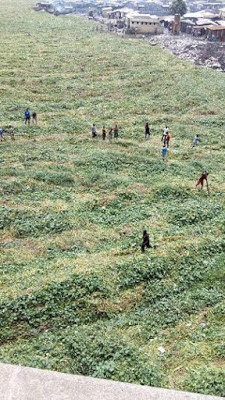 Traffic in bound Lagos slowed down and Road Safety officials tried to make light the gridlock.

Before the unusual incident, the water body once served as means of transportation for canoe owners but residents say they woke up to see the channel blocked on Saturday morning. 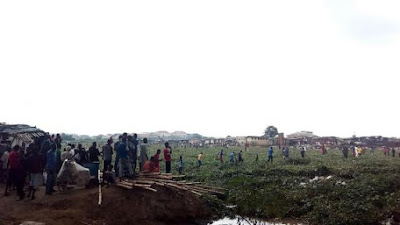 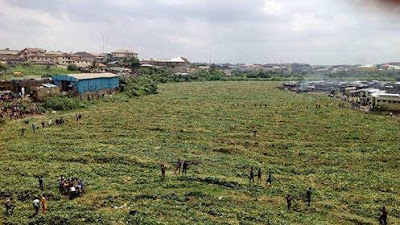 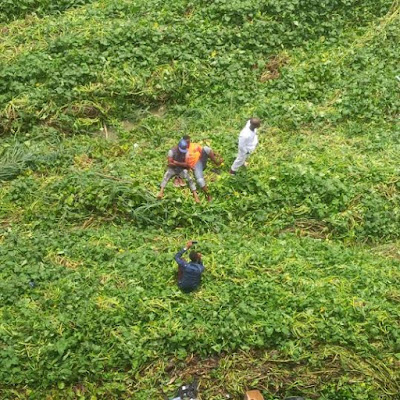 There were initial suspicion that this could be water hyacinth but the surface of what used to be the flowing river hard become a firm ground.

Some people were seen testing the solidity of the green that has taken over the waterway by walking across the river and some found it a readymade recreation ground. 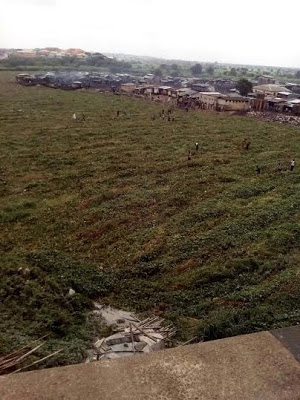 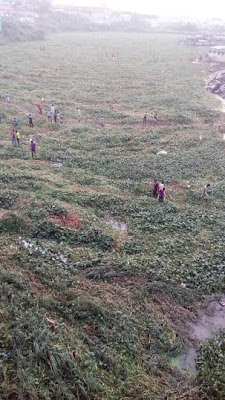 Surprisingly, on the other side of the Kara Bridge, the river is seen flowing freely.

Michael Fagbenro, a panel beater with a workshop located at the Kara riverbank, said those in the area began to notice the plants surface at about 8am on Friday.

He said, “It started gradually; the plants were flowing with the river. But by 12pm, the water began to flow forcefully and brought a lot more plants. It accumulated at a very rapid rate.

“By Friday afternoon, it had completely covered the river. I have been here for over five years and this has never happened. It is obviously not normal. This is unbelievable. When I saw it, I was afraid because it is so strange.”

Asked if he had attempted taking a walk on the seaweed, Fagbenro exclaimed frighteningly, “Who, me? I don’t have the courage to walk over it! I am not one of those born here and I cannot swim. I am even sure that when the plants leave, they will take someone with them.”

Mrs. Christiana Monday-Egbu, a local trader, similarly said she and other workers at the site were fearful at the occurrence on Friday.

The cassava processing business owner, who set up shop by the river over a year ago, said, “It was around 10am when the water started gushing, carrying the plants with the waves. It wasn’t even raining when it started.

“People were startled when it started. It all happened so fast. I have never witnessed such a strange occurrence in my life. Everyone rushed out to watch with surprise.”

Another Kara-based trader of over three years, Mrs. Love Itoro, said prior to the strange development, canoes plied the river, conveying passengers, mostly traders, from one side to the other.

The food vendor explained that at the climax of the incident, a canoe was caught in the middle of the river with five passengers who were meat sellers.

“When the plants started coming in large amounts, it blocked the boat and almost made it sink. The driver quickly came down onto the plants to help the passengers carry their meat. People from the other side then threw a rope and pulled the boat back to safety,” Itoro said.

Mrs. Ability Udoh, a trader at Kara for five years, said the occurrence was not entirely strange. According to her, occasionally, the river would bring sea-based plants.

Udoh, however, admitted that she had never witnessed it in such magnitude.

“We are happy that nobody died,” she said.

Two other traders, Mercy and Blessing of Calabar extraction, said they were shocked and afraid when the incident occurred.

Mercy said, “I too was so scared because I have never seen something like this.”

Blessing added, “I saw someone lying down on the plants on Friday; I was so scared. I cannot believe how daring some people are.”

According to Dr. Folorunsho Adetayo of the Department of Geosciences, University of Lagos, the identified plants are seaweed.

According to the environmental geoscientist, seaweed is a regenerative product of algae.

Adetayo said, “The plants are not harmful. People can come in contact with them without being harmed. The rainy season definitely contributes to it. I cannot say that it is the first time this is happening.

“It could have happened in the past. During certain periods of time, the algae proliferate and are formed around the river course.”

He also dismissed claims that the river had dried up, noting that the algae had the ability to reproduce and regenerate itself at a rapid rate within hours.

He said, “No, the river cannot just dry up in the rainy season for that matter. It is an experience that is not restricted to Nigeria. At least, personally, I have witnessed it in Qingdao, China, two years ago.”

Adetayo however warned, “The government, however, needs to remove the plants because if allowed to stay long, it can become toxic to plants and animals, including human beings.”

A Professor of Applied Geophysics, Department of Geosciences, UNILAG, Elijah Ayolabi, in an electronic mail, also explained that the occurrence was not strange.

He said, “To the ordinary man, this may be strange, but to those of us who have conducted geophysical investigations and geological mapping around that area, it is not strange. However, I will like to see it myself and provide scientific deductions of the occurrence.”

Who Shall Stand On That Great Day?

5 Things to do before hiring a nanny in Lagos