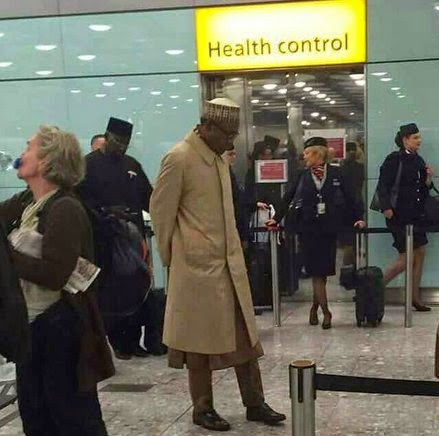 The All Progressives Congress (APC) presidential candidate, General Muhammadu Buhari, has travelled to the United Kingdom for engagements with British policy makers in Chatam House, London.

According to a statement by his campaign media and publicity director Malam Garba Shehu, Buhari is also expected to hold meetings with key members of the British political establishment and interact with some global institutions with interest in the affairs of Nigeria.

Meanwhile, opposition party PDP has been circulating the picture below claiming that the trip is connected to his deteriorating health condition which it said has taken for the worse in the past few weeks.

According to the opposition, his campaign team decided to whisk him out of the country to deceive secret medical attention away from the Nigerian media.