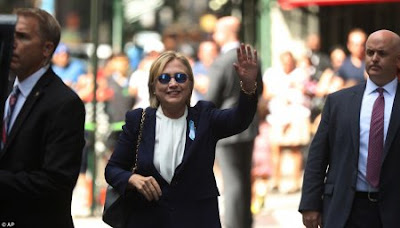 Hillary Clinton, US Democratic presidential candidate today slumped at the 9/11 memorial at the Pentagon.

A video footage uploaded online shows her appearing to lose her balance on the sidewalk before getting helped into a car.

Daily Mail UK reports that she was rushed to her daughter Chelsea’s apartment in Manhattan after the incident from where she later emerged to address waiting reporters.

A statement from her campaign after she left the memorial said: “Secretary Clinton attended the September 11th Commemoration Ceremony for just an hour and thirty minutes this morning to pay her respects and greet some of the families of the fallen. During the ceremony, she felt overheated so departed to go to her daughter’s apartment, and is feeling much better.”

Rival presidential candidate Donald Trump and his surrogates have persistently raised questions about Clinton’s health as a potential campaign issue.