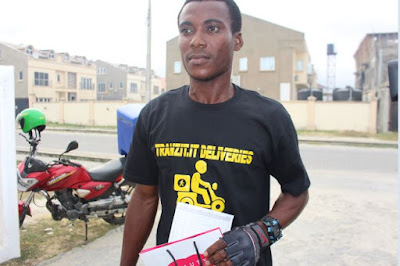 A bad experience with a taxi driver in Lagos three years ago sparked Ugbomeh’s idea. She recalls the experience to ‘African Start-Up’: “I tried to book a cab, and the driver had already given me a price, but before I got to my destination, he had changed the price. And I said, we need to build something to stop transportation problem in Nigeria, because it is frustrating.”

Ugbomeh and two partners started the business in 2012, two years before the popular car ordering service Uber launched in Nigeria. They wanted to capitalise on the multi-million dollar taxi industry in the country.

Ugbomeh tells ‘African Start-Up’: “At the beginning we had a challenge with the drivers, because we were new to the system. Most of these drivers are older and they don’t understand the smart phones, how they work, so there was an educational process.”

In 2013, Ugbomeh expanded the business from taxi bookings to being able to schedule pick up and deliveries of goods. She tells ‘African Start-Up’: “We have some merchants who hire riders daily, and they pay us a certain fee for that, and we have some who hire weekly. Then we have regular people who just want something delivered from point A to B. From the taxi side of things, we pretty much make money from the commissions on the ride.”

With business in Lagos going well, Ugbomeh is looking at ways of growing the business, not just in Nigeria, but beyond. She tells ‘African Start-Up’: “We currently have expansion plans, to go into other cities in Nigeria before the end of the year. In fact a significant chunk of my time has been spent on just the expansion plans. We want to make sure we have saturated the market in Nigeria before we go into other countries.”

TREM’s Daily 31 October 2017 Devotional by Dr. Mike Okonkwo – Your God Will Deliver You

Vital Secrets For A Successful Family (3) by Pastor Faith Oyedepo