TOPIC: Towards A Peaceful And Meaningful Political Campaign

Bible Text: “Deceit is in the hearts of those who plot evil, but those who promote peace have joy.” – Proverbs 12:20

A political campaign is an organized effort which seeks to influence the decision making process within a specific group. In democracies, political campaigns often refer to electoral campaigns, by which representatives are chosen or referendum are decided.

A political campaign involves a number of planned activities designed to increase a politician’s profile, reputation, and ultimately, his chances of winning an election. Campaigns always have a specific objective and are usually conducted within a particular time frame.

The message of the campaign contains the ideas that the candidate wants to share with the voters. It is to get those who agree with their ideas to support them when running for a political position. The message often consists of several talking points about policy issues. Political parties and their candidates try to persuade the electorate to vote for them, normally by talking about their policies.

We practice a democratic system of government which allows great involvement of citizens in politics. The masses are usually involved in the political process and decision making by joining political parties, participating in electioneering campaign, voting during elections and other political activities.

Recently, Nigerian politics has been greatly influenced by the social media like other nations. This has enhanced more political participation of citizens where they are freely allowed to express their opinions about governance, political office holders, opposition and political campaigns. As a result, political opposition is massively done via the social media where deceptive information is spread. The level of cyberbullying and toxicity on social media is appalling and reprehensible.

Already the conversations are taking the dimension of ethnic profiling and divisive campaigns. Overzealous supporters tear each other apart on social media and the media space. Some are already threatening that if their favorite candidate doesn’t win, Nigeria will be on the road to Armageddon. Just as Psalm 35:20 says, “…they speak not peace: but they devise deceitful matters…”

Beloved of God, we simply cannot continue like this. We must put an end to undemocratic tendencies such as thuggery, violence, assassination, manipulation, bitterness, intimidation, vote-buying, ethnicity, coercion, deception, hatred, godfatherism, just to mention a few. Therefore, as another campaign begins, let us promote peace and desist from every toxic act and destructive attitude that can break the unity and peace of this nation.

I pray for you today

So shall it be in Jesus name. Amen

Have a great day!

CHRIST IS THE ANSWER. 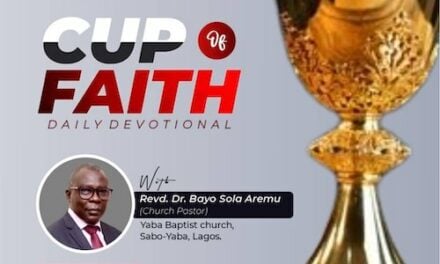